A D800E, Lee Big Stopper and lots of water movement. A good recipe. The first image is interesting – the beach changes almost daily in this area. A week ago you could walk almost up the middle of this image. Soon this will all be deep water, and will remain that way until next summer when the buildup of sand will begin again.

This next image is of a large V – Shaped gap which channels the waves forcing them into the V with increasing force. This is definitely not a place to swim, and is a dangerous place to fish from. 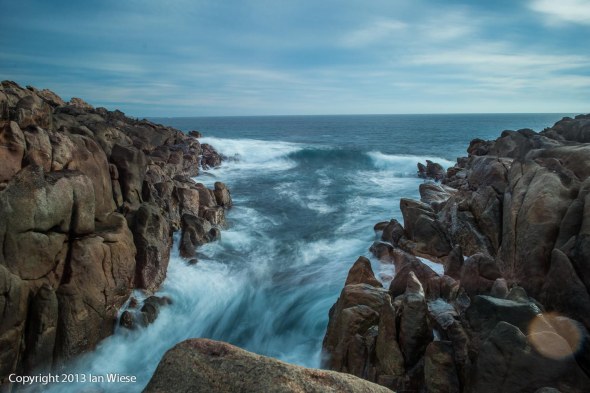 And finally this is where the water forced up into the gap winds up. Occasionally I have seen people swimming here and when the water surges in from the gap, they stand under it like standing under a waterfall.

The classical photos of sand dunes have wind blown ripples in the sand. At Yeagarup at the moment the sand is too wet and any ripples are quite small. However when it rains heavily the water runs down the slopes washing sand down. When the sand dries, the sand that was washed down is loose and dries more rapidly than the underlying sand. This creates bands of light and dark that follow the contours. This photo is a good example. You can also see the small wind blown ripples in the sand on the left. Someone had lit a fire in the background – hence the smoke.

Patterns in the sand

I would expect that later in the year the sand would have dried out and the wind blown ripples of sand would return.

Enough of storms – here is a shot of Meelup with yellow sand, turquoise water and blue skies. It is easy to see why this beach is a favourite of many people (including photographers).

This is one of the prettiest beaches in this region, and it is a favourite of many people. You used to be able to camp here, but that was many years ago. The sealed road used to stop here and there were bush tracks which went just past Pt Picquet. Often in winter these tracks were too boggy to get through and you had to take to the bush to get through! To get to Eagle Bay you had to go back to the main road.

This is a beach that you reach by walking in from the Boranup Forest. 4WD tracks will get you part of the way there, but the tracks are pretty rough. The Cape to Cape track at this point is inland, so this beach has very few people on it, not even Cape to Cape walkers.