It is winter, and there is quite a swell coming in from the west. I went down for a cup of coffee and was quite taken by the effect of the spray off the ocean as you look north towards Sugarloaf Rocks.

Here is a couple more from Sunday’s shoot. Thanks Mark for the loan of your camera! – I needed something for the foreground. I did ask Mark that if he was to take another step backward not to grab his tripod as I would find it useful!

We were hoping the sunset would do the right thing for the clouds to the south, but it refused to cooperate and all the best clouds were to the north!

This next shot was taken a bit earlier. We were hoping to get the late afternoon sun on the cliff, but the sun hid behind some low cloud most of the afternoon.

Looking South earlier in the afternoon

Mark Stothard and I went out to the Willyabrup Cliffs this afternoon. It was a good choice because it is away from the crowds of tourists, and it is a pretty spectacular site. The first image I got was this panorama (2 rows of 4 images). Each image is a blend of 4-5 different exposures (my wide angle lens doesn’t take ND filters). This shot is looking back towards the cliffs. There are three people in this image. On the left is Mark in white shorts and a black top. In the centre is a guy in a blue shirt who has just abseiled down the cliffs. On the right is a guy in a black shirt looking on from the cliff.

In February I went to the cliffs near sunset, and took a series of shots of someone climbing the cliff. I superimposed them all on one image. Here is the result. You can get a good appreciation of the scale of the cliffs by the small size of the climber. Unfortunately his shirt blends in well with the colours of the rock, and you will have to look closely. 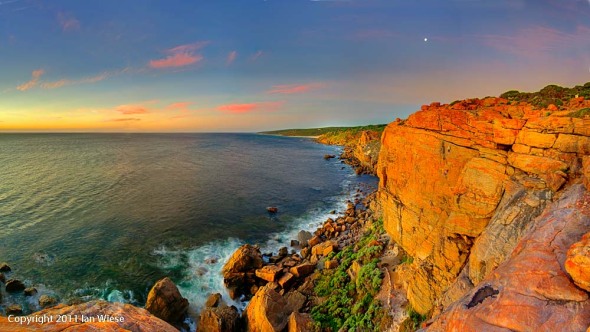 This is an interesting area. The cliffs are used by rock climbers to abseil down and climb back up. The section of the Cape to Cape Trail between the cliffs and the mouth of the Willyabrup River (about 2km to the north) has many photo opportunities. When the river is flowing the river has interesting patterns in the river bed created by black mineral sands deposits. And sunset on the cliffs causes them to glow a fiery red on the right day. This shot was taken towards the north end of the cliffs, looking north towards the mouth of the Willyabrup river which reaches the coast at the stretch of sand you can see.

Down towards the Augusta lighthouse, there are some places where water seeps out of the limestone and trickles slowly over rocks. As it evaporates it leaves behind highly colored deposits. The combination of these deposits, the grasses, and the rocks make some interesting patterns. It is interesting that the limestone is sitting on top of the granite.

I have printed these on Epson Velvet Fine Art paper (a bit like blotting paper for those who aren’t familiar with it) and  they come out great.

The Willyabrup cliffs are used by rock climbers and abseilers. This is a 2 second exposure at f22. On checking the Exif I found out why I needed F22 – I had left the ISO at 800 from a previous shoot. That’s a problem with the modern DSLR – there are so many settings that it is easy to forget something! There’s nothing worse though than getting home after a good shoot to find that the photos are unuseable because you forgot to set something!  Fortunately this one was OK.

Bunker Bay is a beautiful area. The limestone cliffs are best viewed in the early morning sun. This shot could not be taken any further to the left!

This shot was taken just after sunrise. The limestone cliffs catch fire in the early rays of the sun, and reflect in the rock pool. The Sea caves are a natural feature along this stretch of coast between Bunker Bay and Cape Naturaliste. In case you are wondering the sea cave is right in the middle of the image – it is hard to see with the sun shining directly in.

This shot can only be taken in the winter months because it is only then the sun rises far enough north to shine on the cliffs in this way.