Last weekend the forecasts were for a large swell (4-5m). Saturday morning North Point at Cowaramup Bay was the “goto” place. When I arrived the shore was lined up with photographers and in the water there were photographers (with underwater enclosures for their cameras), jet skis, more photographers and some of the better surfers. This shot is of a local surfer who performed this great aerial manouvre 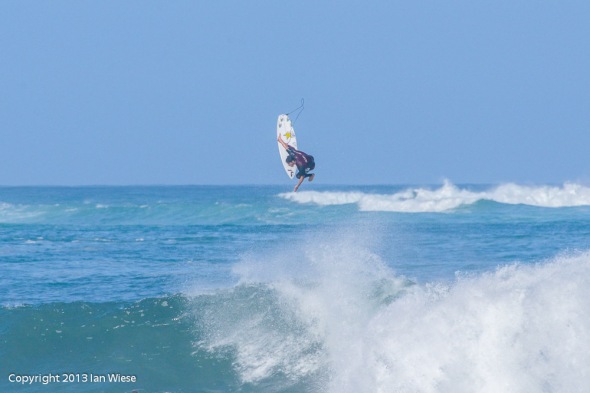 Earlier this week there was a bushfire at Gracetown. It started somewhere near the North Point carpark, and spread to the bush at the northern edge of the town. This must have been a worry because the only road in and out of Gracetown must have been covered in smoke and pretty risky to travel on. If the wind had switched to a northerly, I am not sure how they would evacuate the town.

During the Margaret River bushfires the fire came close to the southern edge of the town! Perhaps they are safe now because there isn’t a lot left to burn! However I think there must be a rethink of these settlements with a single access road – perhaps by linking up adjacent settlements to provide a second exit route. This could be good for tourism as well.

Here is a shot looking over the town towards North Point.

This last image was taken the morning after the initial fire, and it had reignited that morning (although it was well under control).

I am in awe of these guys when they are out in conditions like this. The wind was well over 30 knots, and it was a freezing cold day with occasional squalls coming through.