A Whale of a Tale

Two days ago I saw a whale breaching from the lookout at the top of the hill at Canal Rocks – it seemed to be just south of Three Bears, so I went to Sugarloaf Rock to have a look. When I got there I saw what appears to be a baby humpback breaching every few minutes. He was getting tired and his jumps became less energetic as time went on, but he was at least splashing all the time up until I lost sight.

I followed him visually from Sugarloaf – he was getting further out and heading north (probably 1km off shore when I left Sugarloaf). Eventually I went around to the “Other Side of the Moon” carpark just south of Cape Natualiste and walked north until I was about 500m from Cape Naturaliste. When I got there he had come in close to shore and was rounding Cape Naturaliste heading east into Geographe Bay.

The shot showing the tail was taken looking north across the tip of Cape Naturaliste.

At that point I lost sight.

At no time did I sight any other whales so this little guy was on his own, and my interpretation of his breaching is that he was trying to let his mother know where he was. It is possible he was successful – once north of Cape Naturaliste he changed course dramatically from due north to due east. Up until that time he would not have been able to “hear” anything coming from Geographe Bay, so it is possible he heard a whale in the bay and began heading towards it. (I like to think this is the case and he met up with mum again eventually!).

This raises some interesting questions (apart from whether he eventually caught up with his mum). What is a calf doing so far south at this time – he was 1500km from where he should be? Where did mum get to? (If he didn’t find her his prospects are very poor. Lets hope he was successful).

This is the third sighting of whales in Geographe Bay in April May this year – very unusual.

(I apologize that the photos are poor but he was a long way out. 400mm in a telephoto only goes so far!)

UPDATE: Apparently mum and baby were reunited – two days later a mother and calf were seen in Geographe Bay off Rocky Point.

This morning over 100 dolphins were hunting in a bay just north of Sugarloaf Rock. They were well organised, and herded schools of fish towards the shore before attacking them. When they were close to shore they often burst out of the back of the surf leaping high into the air. Here are some examples.

One good tern deserves another

A different view of Sugarloaf Rocks.

I had an idea about photographing the Cape Naturaliste lighthouse but it needs some more thought. (It all started during the recent meteor showers which I wanted to photograph but clouds blocked the view). However one fundamental rule of photography is “look behind you – there is often a better shot there”. So in this case I looked behind me and noticed the light from the lighthouse was sweeping the rocks. A novel way of lightpainting. The milky way is in the left of the image.

I am reasonably sure I have photographed this pair of Spoonbills before. They inhabit the wetlands around Busselton. They are lovely birds and very photogenic. 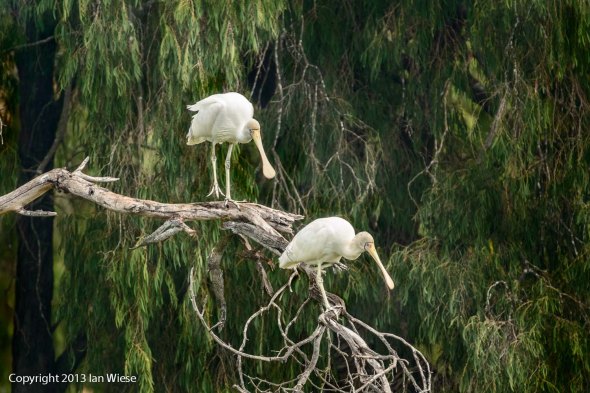 We have had some severe gales lash the coast this week. There were forecasts of a lot of rain (which we got), 125k/hr winds (which never got that strong), and 6-8 mtr swells (more like 2-3). I went to Sugarloaf rocks today and the swell/waves had increased but not to 6m levels. 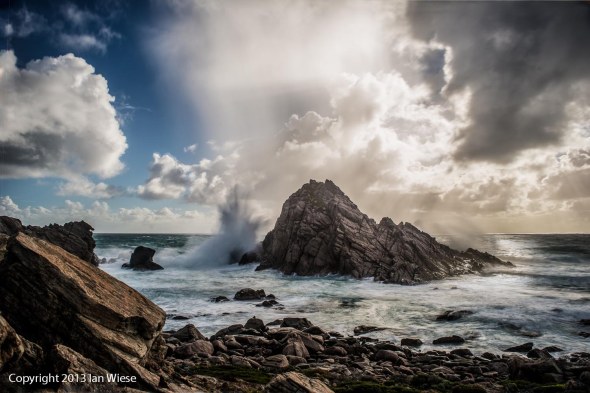