I saw these Western Corellas in a hole in the trunk of one of the Moreton Bay Fig trees on the Busselton foreshore today. The heart shaped surrounding seemed appropriate. 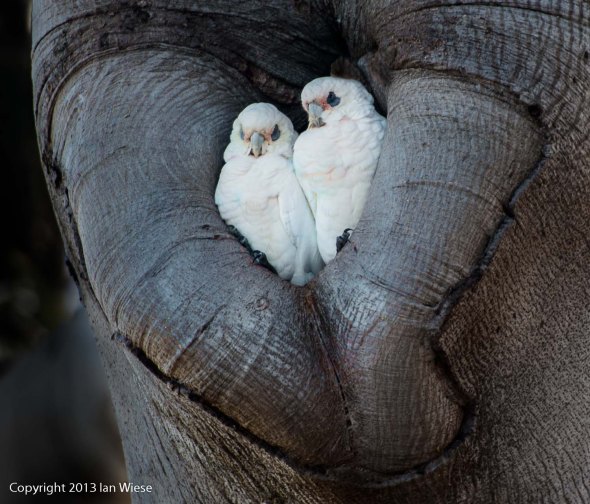 What a Good Saturday!

After a couple of months of nonexistent temperatures (doesn’t 0 = nothing?) it is a joy to warm up again. This Easter is heading towards one of the best I can recall, weather is perfect (Definition of perfect weather = 28 Max temp, overnight cool enough to sleep well, light winds, low humidity, just enough clouds to make photography interesting). So here is an image that illustrates this. Well OK both clouds were behind me! Gannett Rock from Pt Picquet with a yacht blocking the view!

I have been going back through my images from the UK in Jan/Feb. This was taken in Paddington station, London (after the security guard gave permission – trust me!). The temperature was around zero with snow flurries outside. In this image I liked the travellers outside. The man struggling with his luggage (in a hurry) and also the man with the green bag (in no apparent hurry) caught my eye. But I keep keep getting drawn to the warmth (or appearance of warmth!) inside the shops. The magnificent roof towers above and I found the roof of the station incredibly interesting (I posted an earlier image of the roof of Paddington station).

Ok – it was 4.49 Pounds not dollars but I haven’t worked out how to insert a pound sign yet.

For the ladies – “Gentlemen – all sizes”

In my travels I saw many things. This shop caught my eye. At the size of the image on the web it is probably difficult to make out, but the sign on the mannequin says ‘up to 62″ which doesn’t seem very big (for a gentleman).

Back home in the South West of WA. Last night I went out to Sugarloaf Rocks as there was some cloud around, and it even looked like there may be a thunderstorm. When I arrived there was a large band of cloud above the horizon, and the sun was disappearing behind it. It didn’t look promising, and some photographers left. I noticed a clear band just above the horizon and stayed to see if the sun would make a final appearance. It did and the sunset was quite spectacular.

For Joanne (Another Paris shot)

This is very much a “postcard” shot – the degree of difficulty was high. (Long exposures handheld in -2C temperatures). However it is hard to take a bad photo of the Eiffel Tower. (The next post will be from somewhere else).

(Joanne is my niece and has been saying nice things about my Paris images!)

If you go to Paris you will always see the Arc De Triomphe. It is hard not to as it is a major traffic thoroughfare. This shot was taken at night. To help orientate you it is taken under the middle of the central arch looking straight up.

The next shot was taken in The Louvre. This is one of the connections between galleries – I couldn’t tell you where as by this time I was completely lost in spite of the maps. I liked the architecture of these stairs.

The Louvre – the ancient and the modern.

The Louvre in Paris is amazing – it goes on and on forever, and the exhibits are superb (from ancient Egyptian antiquities to French and Italian paintings). This image was taken in the same room the Mona Lisa was displayed in – the painting is a very large painting on the wall at the opposite end to the Mona Lisa. As the figures in the painting were life size the people in the room look like they are part of the scene!

The Mona Lisa itself was disappointing. It was displayed behind glass and you could not get close. Also the painting seemed to have a strange yellow/green cast and I suspect this was a color in the room caused by reflections from the floor. I would love to see it up close.